Skip to content
Home » Fitness » Yoga For Weight Loss: Benefits,Types, And Much More

Yoga, the instrument for improving one’s mental and physical health, is a great way to lose weight. When performed at a reasonable speed, it functions as an aerobic exercise and aids in weight loss.

Additionally, it has a benefit over different forms of exercise. It reduces stress, which is often one of the main causes of weight gain.

You come away from it feeling focused, calm, and alert. Yoga makes your breath, mind, and body work together harmoniously, which reduces stress.

Yoga encourages the growth of your soul, body, and mind so that you could become the best version of yourself.

Yoga, especially the more energetic varieties, might also be a useful method for weight loss.

Additionally, you might discover that the awareness you get through a soothing, calm yoga practice aids in your weight loss. Many specialists concur that yoga helps people achieve healthy weights in several ways.

In this article, we will be looking at the benefits of yoga for weight loss, its types, and more. 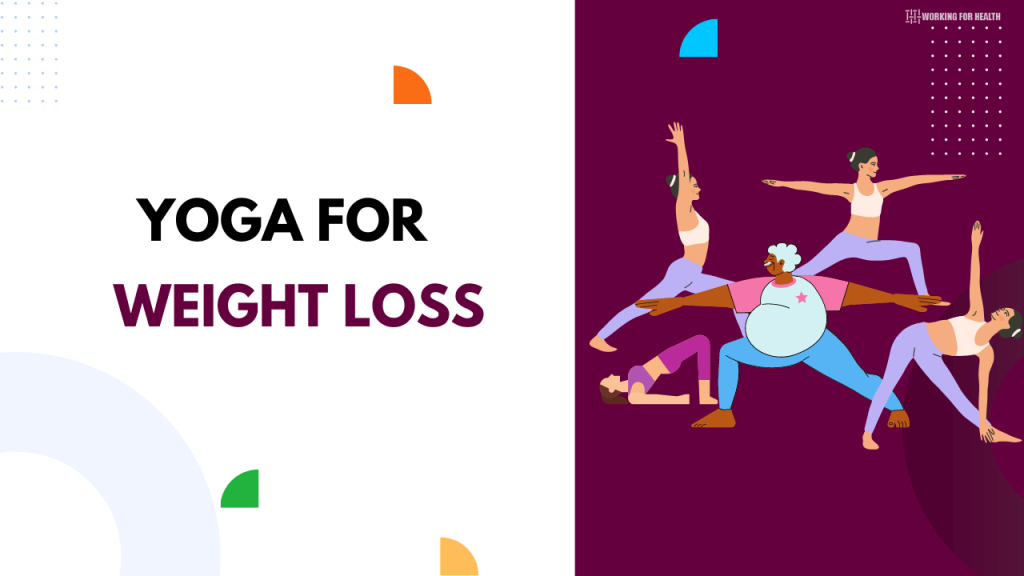 Benefits Of Yoga For Weight Loss

Types Of Yoga For Weight Loss

Here are some types of yoga for weight loss-

Is Yoga Good For Weight Loss?

Despite your best efforts, you might not be able to lose weight as obesity is a complex disease with a lot of contributing factors.

A family history of weight problems might increase your likelihood of developing similar problems with your weight.

Eating a diet high in fat, sugar, and ultra-processed foods, and being sedentary also cause weight gain.

The factors that further lead to weight gain include the use of medications to address certain mental health concerns, stress, hormonal changes, mental health issues, and poor sleep.

There are numerous strategies to deal with obesity, but no one method works for everyone. You might want to give yoga a try if you are attempting to reduce your weight.

Yoga could also strengthen your muscular tone and mass while helping you to burn calories. Yoga might improve joint pain, which allows you to engage in more activities and move more each day.

To conclude, Yoga is an Indian method of rejuvenation for the body and mind. It is a wonderful method for maintaining a stress-free mind, and a toned, healthy physique.

It offers enormous advantages for everyone, from those who only want to unwind to those who are overweight and wish to lose weight.

If you want to use yoga to reduce weight, commit to yourself and also your practice. Make steady improvements and set modest goals to increase your chances of sticking to them.

As your awareness and practice grow, you might discover that you are drawn to leading a healthy lifestyle and eating well.

Even while losing weight is not assured, yoga is possible, and your promising results might go far beyond weight loss.

One Meal A Day Diet: Know About Its Benefits, Risks, And Much More

12 Juices For Weight Loss: Taste And Health Together