Skip to content
Home » Nutrition » Whey Protein: What Is It, Types, Benefits, Uses, And More

One of the most common proteins found in dairy products is whey protein. Whey protein is a byproduct of the cheese-making process.

It contains significant levels of essential amino acids. The presence of an adequate amount of amino acids in the human body is necessary because they have numerous benefits.

These amino acids build body proteins and other critical nitrogen-holding compounds that perform important roles in the body.

Whey protein, usually in the form of a powder, could be mixed into soft liquids, such as apple sauce or blended into a smoothie with fresh fruit and ice.

Persons who do not get enough natural protein in their diet, athletes, weight lifters, and anyone who wants to gain strength, muscle mass, and lose body fat should use whey protein.

Protein is the most effective nutrient for decreasing fat mass and increasing muscle mass. Whey protein is one of the best available protein sources.

Naturally, anyone wishing to supplement their diet with more nutrients could consume whey protein powder.

But, on the other hand, one shouldn’t be entirely dependent on whey protein for all the protein requirements.

One must strike a balance between whey protein and consumption of high protein foods. This balanced approach will surely be a beneficial step in the longer run.

Whey protein might also have the ability to help in treatment of diabetes, asthma, weight loss, and several different ailments, though most of these claims lack scientific backing.

In this article, we will be looking at whey protein, its types, health benefits, dosage, side effects, and a lot more. 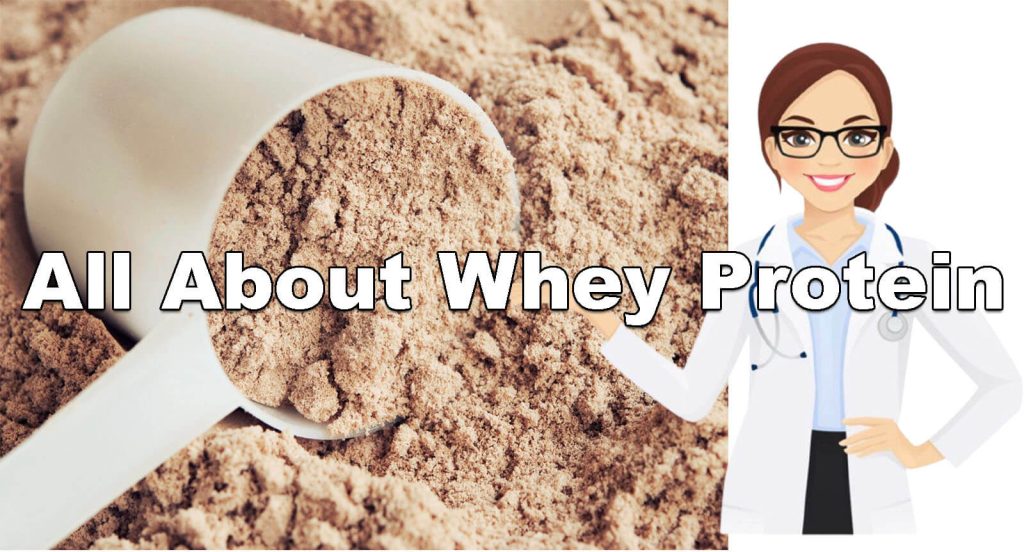 What Is Whey Protein?

It is an eight-protein family[1] found in milk. These eight proteins are listed in order of their abundance in milk, from the least abundant to the most abundant:

In the process of cheese making, enzymes are added to the milk.

The enzymes create a curdle in the milk, separating the whey in liquid form from the solid curds in the milk.

The curds containing the majority of the fat in milk are the key component of cheese.

When you remove the firm curds, you are left with a whey protein of watery texture.

It contains different concentrations of milk sugar (lactose) and fat. Typically, whey is pasteurized to kill germs, such as bacteria before being dried. Protein powder is made from whey.

Whey protein is a blend of proteins extracted from whey, which is the liquid portion of milk that separates during the cheese-making process.

If you have ever opened a yogurt container and seen liquid floating on top, that would be whey.

Before they recognized its commercial potential, cheese makers used to throw it away.

Whey is separated during cheese manufacture and then goes through a series of processing procedures to form whey protein, a powder that is commonly used in protein bars, shakes, and meal replacements.

Whey protein is usually flavored as it does not taste very nice on its own. Popular flavors are strawberry, chocolate, and vanilla.

It is critical to study the ingredients list as certain items might contain harmful additives, such as refined sugar.

Whey protein is a practical way to supplement your usual protein consumption.

This is vital for gym-goers, bodybuilders, and also people who have a protein deficiency in their diet and need to shed weight.

Most flavored whey proteins are also quite tasty and could be used to enhance the flavor of healthy meals, such as smoothies.

Whey is usually well tolerated, though lactose intolerant persons should exercise caution, and some people might be allergic to it.

Whey protein travels through another process to become one of three types:

Here are some health benefits of whey protein:

Dosage And Side Effects Of Whey Protein

Taking 2 scoops (about 50 grams) of whey every day after exercises is a common intake recommendation. It is best if you adhere to the serving guidelines on the package.

However, remember  that if you have been already consuming a lot of protein, the addition of whey protein might be unnecessary.

Protein excess could cause renal damage and also contribute to osteoporosis, but these effects are very rare.

Protein has been found to aid in osteoporosis while having no negative effect on your healthy kidneys.

People with liver or renal problems should try avoiding whey protein or at least seek healthcare professionals’ advice before doing so.

A lot of whey protein in your diet could lead to digestive issues, such as cramps, nausea, diarrhea, gas, and discomfort. Whey might also cause allergic reactions among certain people.

If you are sensitive to ordinary whey protein hydrolysate, concentrate, or isolate might be a better alternative.

You could also omit whey protein and try replacing it with foods rich in protein.

Whey protein has got a good safety profile. Therefore, most individuals could ingest it without having any issues.

Whey protein is an extremely good approach for increasing your protein intake.

It is a protein source of high quality which people could use and absorb effectively.

This is very crucial for bodybuilders, athletes, or anyone looking to improve strength and muscle mass while shedding extra fat.

Protein might be considered the king of nutrition when it comes to fat loss and muscle development.

Whey protein might be considered superior to different varieties of high-quality protein.

Whey protein supplements along with powders are an effective and healthy method to augment your regular diet with more protein.

It is a fantastic source of protein that our bodies easily absorb.

Because of its pleasant taste, concentrate is the most preferred type of whey protein.

You might eat it plain, put it in your cuisine, or drink it with water or milk.

If you want to reduce weight, you should combine weight training with the ingestion of whey protein.

It might help you lose weight by boosting your metabolismand preserving lean muscle mass.

Whey protein powder might be used as a meal supplement as it quickly fills you up and prevents hunger sensations.

These hunger sensations are frequently the cause of overeating.

Intermittent Fasting While Pregnant: Is It Really Safe?