Many men have to deal with diminished sexual desire in today’s era.

Because of a lack of time for oneself and also their relationships, challenging work goals, and rising stress levels, this issue has increasingly grown for millennials.

Some people have no choice but to use Viagra type of sexual medications, while others might encourage themselves to consult medical professionals and sex therapists.

Several people also believe in herbs and consuming natural substances. There is a natural herb known as Ashwagandha, renowned for improving a man’s sexual life.

Since the ancient period, people have recognized ashwagandha as a herb that could improve erectile dysfunction among men.

One of the earliest known pieces of literature on sexuality refers to the Ashwagandha plant and accumulating scientific data in today’s world supports this claim.

Ashwagandha is both practical and secure in most cases. In this article, we will be looking at all about ashwagandha and erectile dysfunction. 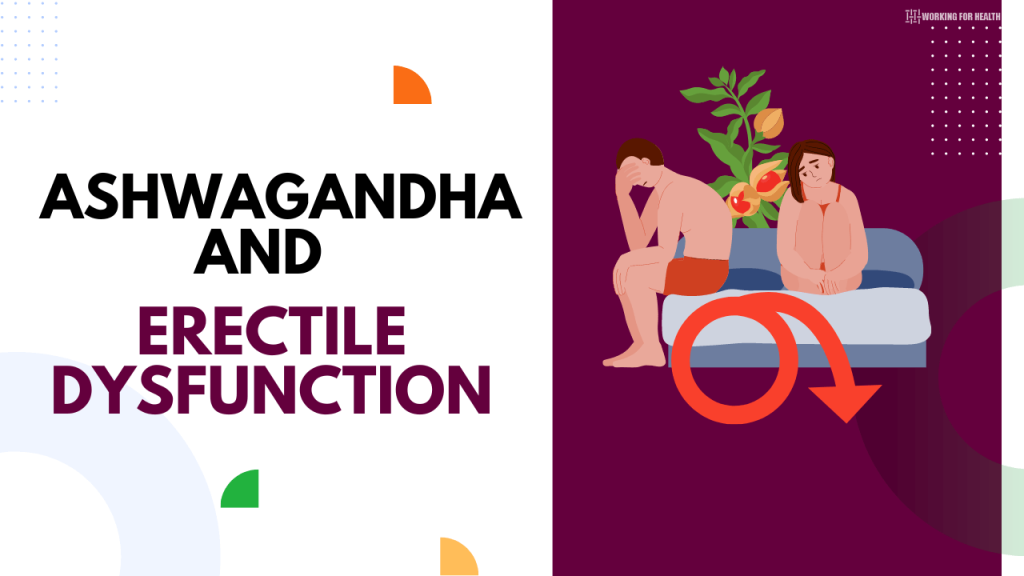 In Ayurveda medicine, ashwagandha is said to have several advantages[1].

Some include the improved function of reproductive organs, reduced erectile dysfunction symptoms, and enhanced penile health.

Many men utilize ashwagandha herb as a less expensive alternative to traditional erectile dysfunction medications like Viagra, primarily because they cannot take Viagra for medical reasons.

But, not to miss, it could also help with cortisol reductions, which may help in issues like erectile dysfunction brought on by low testosterone or anxiety.

However, there are no peer-reviewed studies of ashwagandha’s effect on vasculogenic erectile dysfunction, which usually accounts for most cases.

A pilot study[2] on 50 women indicated a significant improvement in sexual function and sexual distress scale.

In addition, their arousal, lubrication, orgasm, and sexual satisfaction saw a considerable improvement compared to the placebo group.

There was no significant difference between Ashwagandha and placebo for psychogenic erectile dysfunction.

These results may be related to the stage of the ED. The study included males with moderate to severe ED, so maybe ashwagandha could be helpful in the initial stages of ED. However, more research is warranted.

One literature review from 2018 suggests that ashwagandha might improve testosterone levels in men, based on several different studies.

Another 2010 review[4] discovered an increase in luteinizing hormone, which could help boost testosterone synthesis among ashwagandha users.

The study also discovered a significant rise in testosterone levels in both groups of seventy-five infertile and seventy-five fertile males.

However, numerous studies haven’t found any appreciable rise in testosterone by taking ashwagandha over a placebo, and some have also discovered considerable declines.

On the other hand, when it comes to treating erectile dysfunction, there are a few positive and negative studies.

Therefore, one could say that more studies are needed concerning Ashwagandha and Erectile dysfunction.

Benefits Of Ashwagandha For Erectile Dysfunction

Here are some potential benefits of the herb ashwagandha for ED (erectile dysfunction):

Is Ashwagandha Safe To Use For Erectile Dysfunction?

The fact that the FDA, also known as the Food and Drug Administration, does not control manufacturers of  Ayurvedic herbs is one of the potential issues with this topic.

This indicates that they are not bound to the same standards as businesses that manufacture foods and drugs.

Before buying any goods, consumers should make sure to perform some research about the maker.

Some Ayurvedic items might include arsenic, mercury, and lead in concentrations that are higher than what medical professionals consider to be safe for a person’s daily intake, according to the National Center for Complementary and Integrative Health[11].

The herb ashwagandha is usually sold as a capsule or powder. There is no scientific proof that it could treat erectile dysfunction, despite anecdotal accounts of the contrary.

A person could try alternative treatments for erectile dysfunction, such as L-arginine or Viagra if there is no underlying problem.

Alternatively, sex therapy might be helpful if the cause of erectile dysfunction is psychological.

A patient with erectile dysfunction should talk with their doctor about any potential underlying issues. In general, ashwagandha has few side effects and is risk-free.

Before using ashwagandha herb as a supplement, you should go over the potential disadvantages and advantages with your doctor.

14 Foods To Avoid With High Cholesterol