Trigonella foenum-graecum Linn is the scientific name for fenugreek. It is a herb species that are indigenous to portions of Europe and Asia. Additionally, people eat the herb’s leaves and seeds in addition to its different parts.

There are three ways to use fenugreek seeds: in seed extracts, as raw seeds, or in powder form. The seeds are very nutritionally dense.

They are a powerhouse of advantages and contain bioactive substances and minerals. They have actions against inflammation, diabetes, cancer, and hypercholesterolemia.

In different Asian nations and India, fenugreek seeds are a common household staple. It has been utilized as an alternative medicine to potentially ease pain and treat several illnesses.

They have a deep brown-yellow color and are cuboidal in shape. In this article, we will be looking at the nutritional facts, benefits, side effects, and a lot more of fenugreek seeds. 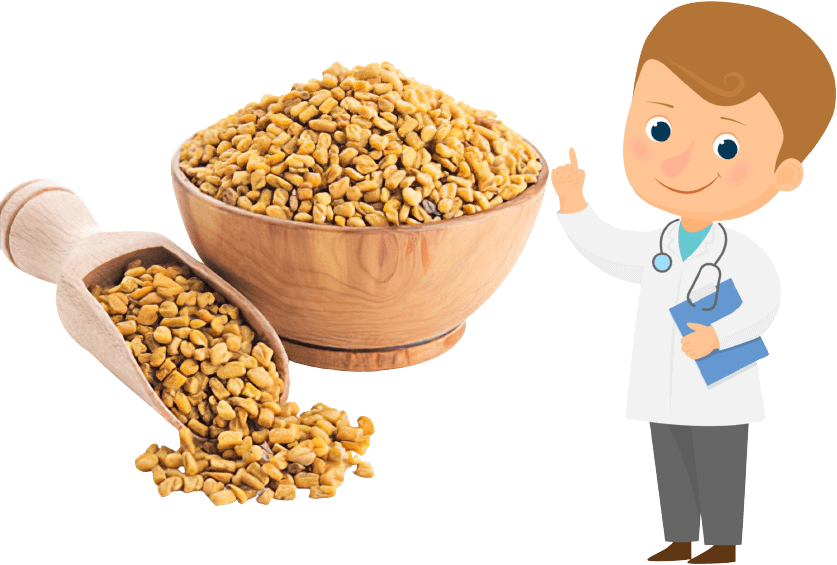 Fenugreek seeds make an excellent[1] food supplement as they are a lower-calorie food that is rich in carbohydrates, minerals, and vitamins.

Fenugreek seeds have the following nutritional value per 100 grams:

A slightly bitter, sweet-tasting, smell resembling burnt sugar, describes the flavor and aroma of the seeds.

They could be eaten cooked or raw. They are often grounded and used as spices. They might also be combined with flour for making bread.

The seeds, which were once thought of aiding in digestive help, have also been used as an internal emollient for digestive tract inflammation, and external poultice for abscesses, and boils.

The herb is used as a distinguishing component in several chutneys and curries and is also used to manufacture maple syrup.

Fenugreek, according to research[2], is occasionally used to encourage nursing mothers to produce more milk.

In northern Africa, it is utilized as livestock feed while in some regions, it is consumed as a vegetable.

Here are some benefits of fenugreek seeds:

Side Effects Of Fenugreek Seeds

However, fenugreek seeds, especially at higher doses, might have unwanted effects, such as flatulence, diarrhea, and lightheadedness.

A large reduction in sugar could also be brought on by high doses. Fenugreek should be avoided if you take diabetes medication as it might cause hypoglycemia because of this.

Additionally, fenugreek could lower potassium levels. Fenugreek should not be consumed by patients who are taking drugs to lower blood potassium levels, such as certain diuretics.

Fenugreek might potentially cause[11] reactive allergies. To be safe, avoid fenugreek if you have coriander, peanut, or chickpea allergy.

Additionally, there have been some occurrences of liver damage in individuals who took excessive quantities of fenugreek.

Clinical investigations have utilized several formulations and doses. A trial evaluating the use of a hydroalcoholic extract of fenugreek seeds in individuals having Parkinson’s disease at 350 mg twice daily for 6 months was conducted.

This government paper[12] states the dosage of fenugreek but it is better to consult your doctor regarding the dosage. Your doctor could direct you on the dosage, keeping in mind your medical condition and other medication intakes.

Fenugreek is a cooking spice that has health benefits for several unrelated ailments, including poor libido, diabetes, menstrual cramps, and a lot more.

Fenugreek is also used to increase nursing moms’ ability to produce breast milk. There is not much data to back up the assertions as of currently.

Although fenugreek is usually thought to be harmless, some people could experience diarrhea, flatulence, and nausea. Fenugreek could be used as a liquid extract or a supplement in addition to its culinary applications.

It has no recommended dosage. Supplemental fenugreek’s long-term safety is uncertain. You should avoid it if you use diuretics or diabetes medicine because of its impact on potassium and sugar.

It is always better to consult your doctor or health expert before beginning the consumption of fenugreek as they could suggest to you the appropriate dosage of this seed according to your health.